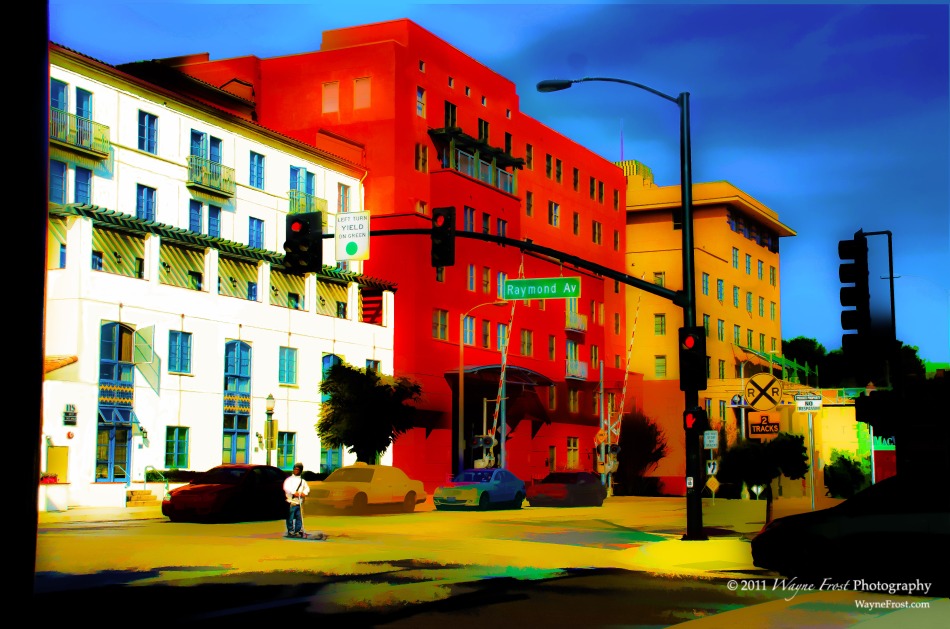 These buildings stand on the north side of Del Mar Boulevard between South Raymond Avenue in the foreground and South Arroyo Parkway in Pasadena, California.   Coming up Raymond from where we parked I was attracted by the bold colors of the buildings which reflect the re-urbanization of Pasadena, they were constructed after the beginning of the new millenium and are primarily housing units with maybe some business activity on portions of the first floors; there is an interurban rail line that passes through the red building in the center.  This block of buildings is situated on the southern edge of Old Town Pasadena, adjacent to many Pasadena historic structures.

I started with an HDR processed image, used Lightroom to flatten some of the detail, then went further with Topaz Simplify.  Then masked back in some of the detail at varying opacity; then hand painted in all of the white building in order to get the color  and texture where I wanted it.

This entry was posted on October 12, 2011 by Wayne Frost. It was filed under Architecture, HDR, Interpretive Digital Image, Photography and was tagged with building, housing, interurban, old, Pasadena, rail, town, urban.