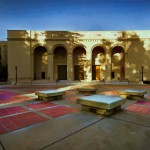 The Maybel Shaw Bridges Music Auditorium was designed by architect William Templeton and constructed in 1931 at a cost of $600,000; it seats 2,500.  This view s of the north and west facades of the auditorium which sits on the eastern edge of Marston Quad, at Pomona College, Claremont, California.

Memorial To An Education Uncompleted & A Life Cut Short

I love these doors, I love the drama of the entire threshold.  This is the Mabel Shaw Bridges Hall of Music (Little Bridges), Pomona College, Claremont, California.  The Mission style building was designed by Myron Hunt and built in 1915.  It had it latest renovation in 2001.  The building was a gift from Mr. and Mrs. Appleton Shaw Bridges in honor of their daughter Mabel Shaw Bridges ’08, who died after an illness in 1907.