Straddling the northeast corner of Foothill and Myrtle, the First Presbyterian Church in Monrovia, California projects an image of  strength and durability.  If I squint my eyes just right, I see archers on the top of the tower aiming their arrows at me.  Then in a flash during this Tecnicolor dream, my crimson blood pools on the pavement in the foreground.

Monument To A Deity 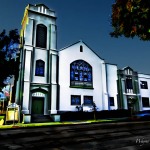 Returning to where this blog left at the beginning of last week, we are back in the city of Glendora, California where we captured another monumental structure, the First Christian Church.  As the title of this post implies, on the surface the church building is a monument to the Christian Deity, however, I submit that it is really a monument to the people who founded this church.  Those who organized and brought the first congregants together, who raised the funding and navigated through the process of building and furnishing the structure.  Given that Christian religions see God as a manifestation of Man, I have to draw the conclusion that while church building’s may serve to celebrate, revere and worship their related Deities, the buildings themselves really serve as a monument to those persons who have successfully promoted the philosophical values embraced by their peer leaders.  The people founded, nurtured and sustained the church, not some mystic Deity.

I am intrigued by the dark tones of  the windows and other structural elements against the stark whiteness of the concrete structure, it really leaves me with a feeling of severity.  Kind of like the severity of a religious zealot obsessed with punishing those who might transgress the moral standards of the zealot.

Please click the image to view in high resolution.

“And the sun shall shine upon it.”

The quote in the title is not from the Bible, as far as I know, I just made it up as it seemed to fit the image.  The is the First Church of Christ Scientist in Pasadena, California.  My intent  in capturing the building from this location on the south side with the sun illuminating the dome and from this angle was to convey how monumental this building feels to me.  The odd thing is that while this is a landmark building, it has been real easy to miss.  It is situated on the corner of Green Street and South Oakland Avenue, a block south of the somewhat larger thoroughfare, Colorado Boulevard.  Green Street is also lined on both sides with mature tress, so while we have frequently passed by here as we have traversed Green Street, this gem of a building had gone largely unnoticed to me, until we got out of the car and were walking the street.

It was almost 4:00 P.M. on  a November day when I captured this image and the light from the sun was turning golden, still lighting up the dome while the lower structure was in shadow.  The golden tones on the dome together with the orange tones on the row of trees in the right foreground are probably indicative of the only hints we get of a fall season in Southern California.

Please click on the image to view in high resolution or to order a print through my gallery. 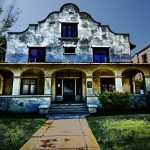 Located on the back side of the First Congregational Church in Riverside, California is its parsonage.  After capturing this image I almost had the urge to donate some paint to the church, but I don’t think I could afford the amount of paint that would be necessary to spruce up the parsonage, and then it would no longer make such an interesting subject.  I applied some painterly effects to this image using Alien Skin Snap Art.

The cornerstone at the First Congregational Church in Riverside, California was laid on December 1, 1912 and has remained in place with the completed building for 99 years.  While I did take some liberties in terms of  emphasizing the grunge when rendering this image, the building in real life does look almost as worn as it does here.  I don’t know if that is a factor of the material used to construct the  building or not,  but I would expect this kind of “wear” to be present on a building that is five centuries old, but not just under a century as in this  case.

This building and the adjacent parsonage (which I will share later in the week) has a lot of character which is what attracted me to it and I find cornerstones very interesting.  This cornerstone certainly seems to express the beliefs of those who laid it and utilized the finished structure.  It does seem very appropriate if you subscribe to the beliefs, in this context. 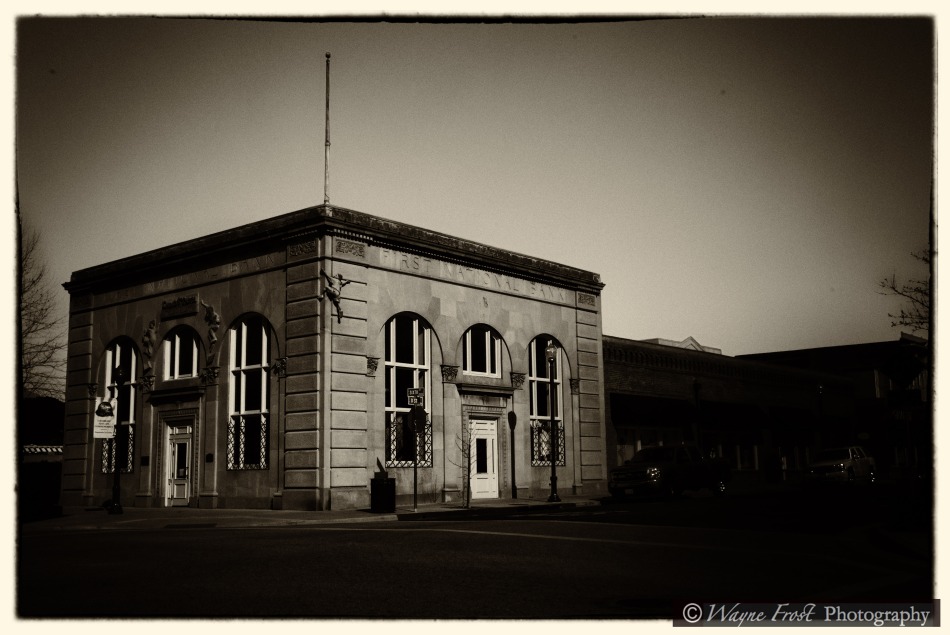 Returning to Chino for an installment of the Another Time series, this is the view from the corner of 6th & D Streets, looking northwest  at the anchor structure of the block, the former First National Bank of Chino.  The original bank structure on this site was erected in 1904 and it was replaced  by this structure which was built in 1924 under the supervision of the Pasadena based architectural firm Marston, Van Pelt and Maybury.  The only other structure still known  (in my research) to exist that is attributed to Marston, Van Pelt and Maybury is a mansion in the San Rafael hills neighborhood of Pasadena.

In 1905 A.P. Giannini founded the precursor of the Bank of America, the Bank of Italy in San Francisco.  Giannini was the banker who invented the concept of branch banking.  In the early years of banking in California and in the United States banks were prohibited by law from having multiple branches.  Giannini and others would get around these regulations by merging banks and operating them under holding companies.  S0me time later Giannini merged the First National Bank of Chino with his Bank of Italy through his holding company and commissioned the 1924 construction of the First National Bank building which still stands today.  In 1930 Giannini renamed his bank holdings Bank of America, after merging his original holdings with the Bank of America in Los Angeles in 1928.  The “First National Bank” that is carved in to the pediments of the building, likely was obscured and replaced by “Bank of America” signage during that era.

Later in the 20th century Bank of America erected a new banking building three blocks away, at the corner of C Street & Central Avenue, vacating the 6th & D street building.  The bank branch at C Street & Central Avenue was eventually closed by Bank of America during a consolidation of branches and that building now houses.  In 2000 this building was re-opened as the Chaffee College, Chino Education Center.

The original First National Bank building changed hands after the bank left it and at one point it served as a component of a local hardware store that was operating in adjacent buildings on the block.  In 1996 the city of Chino became interested in the building, eventually acquired it, rehabilitated it, including seismic retrofitting and opened the building as the Chino Youth Museum on December 12, 1999.  If you look closely you will see what looks like a small boy scaling the corner of the building, somehow I don’t think any bankers had that in mind when the building was constructed.

As in other images in this series after HDR processing I converted the image to black and white using Silver Efex Pro 2, burned in some of the shadow areas, sepia toned the image, applied a filter to emulate Kodak Plus-X film and burned the borders to give it a vintage look.  I can imagine a “tin Lizzy” parked in front of the building,

A hat tip goes to Al McCombs of the Chino Champion for contributing to this post with some of his knowledge of local history.