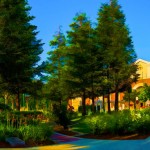 This ismage validates the photographer’s mantra “Always look behind.”  This image was captured from approximately the same postion as the image published last week, titled “Back Door of Commerce”, just with the camera’s stationary postion rotated 180 degrees.  When you are out and about looking for scenes to photograph, always, always remember to check out everything  around you, sometimes the changes in perspective can be astounding.

The building houses the Robert Pile Chaffey College Information Center on Seventh Street, which was redeveloped in the former downtown Chino commercial center by the city, Chaffey College and technology industry sponsors for teaching information technology programs.  I really like the work that the landscape architect did in the plaza which is behind the adjacent school building, and the commercial buildings on “D” street, the stand of fir trees give me good environmental vibes.

The Carnegie Library on the campus of Pomona College was opened in 1908 after receiving a grant from the Carnegie Foundation and is one of two academic libraries built by the Carnegie Foundation in California.  The building on the campus in Claremont, California was repurposed after the present campus library was completed in 1953 and now is known as the Carnegie Building and houses Social Sciences offices and classrooms.  The Library was designed by Franklin P. Burnham using reinforced concrete in the Classical Revival style.

Andrew Carnegie  one of the wealthiest men that the United States had produced was a Scottish immigrant who began as a worker in a bobbin factory and eventually rose through the railroading and steel industries to become one of the largest philanthropists in American history after he sold Carnegie Steel to J.P. Morgan (who through merger turned it in to United States Steel)  and netted the equivalent in 2012 dollars of  $6,303,451,104. 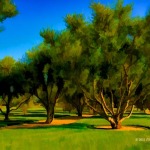 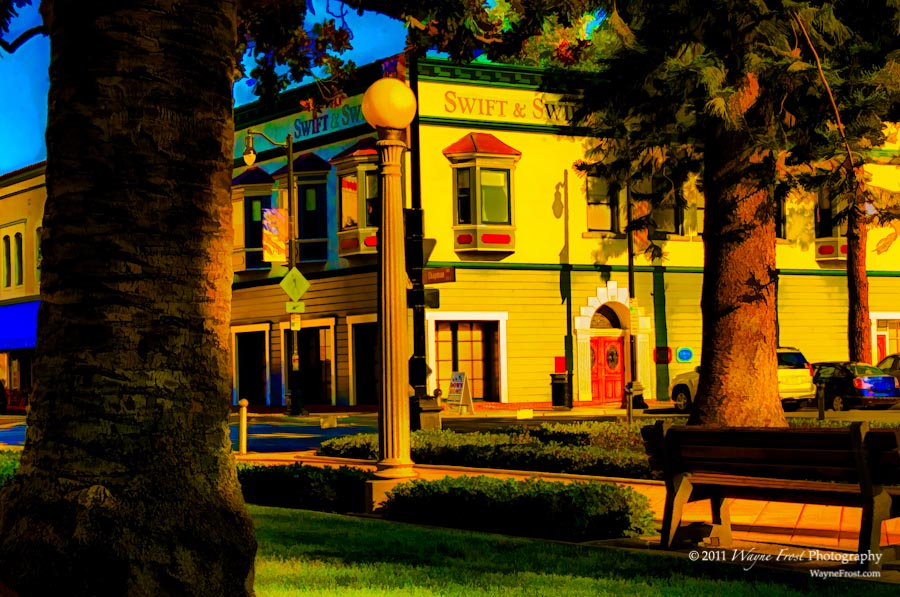 Another image from the city of Orange, California, this is the view from Plaza Square Park looking toward the south east corner of the plaza.

Click on the image to see the high resolution version.

A succulent garden at The Living Desert in Palm Desert, California, in my mind it conjures up dinosaurs roaming the world in the pre-historic era.

An Era Past: Farmhouse #1

The farmhouse is an anachronism, by the side of the road in an area that is rapidly suburbanizing. Thirty years ago this area was in its agricultural prime and was designated the San Bernardino County Dairy Reserve, with 300,000 cows on the land.  Dairy’s, horse farms, fields of cattle feed or produce under cultivation have been squeezed out or overrun by housing tracts, schools, shopping centers, distribution warehouses and parking lots.  Directly opposite this farmhouse, on the other side of the road, are blocks of multi-family housing and a new shopping center.

This image tells me a story, about a former life abandoned and forgotten.  The farmhouse seems to be unoccupied, the light coming through the door and window just light passing through from the back to the front of an empty house.  The trees looking scraggly and overgrown.  The land around the house fallow.  The old motor home, possibly where the property owner now lives, or maybe a squatter.  The telephone and electrical line passing by overhead representing the inexorable progress of suburban life. The arrow painted on the pavement in front, as if to indicate one should turn away from this house.

I tried this image out in black and white but I think it works better in color with a gray sky in the west (the direction that the suburbanization is expanding from) overtaking the blue sky in the east, and some of the foliage and the field on the side of the house yellowing and browning.

Standing Out From The Crowd 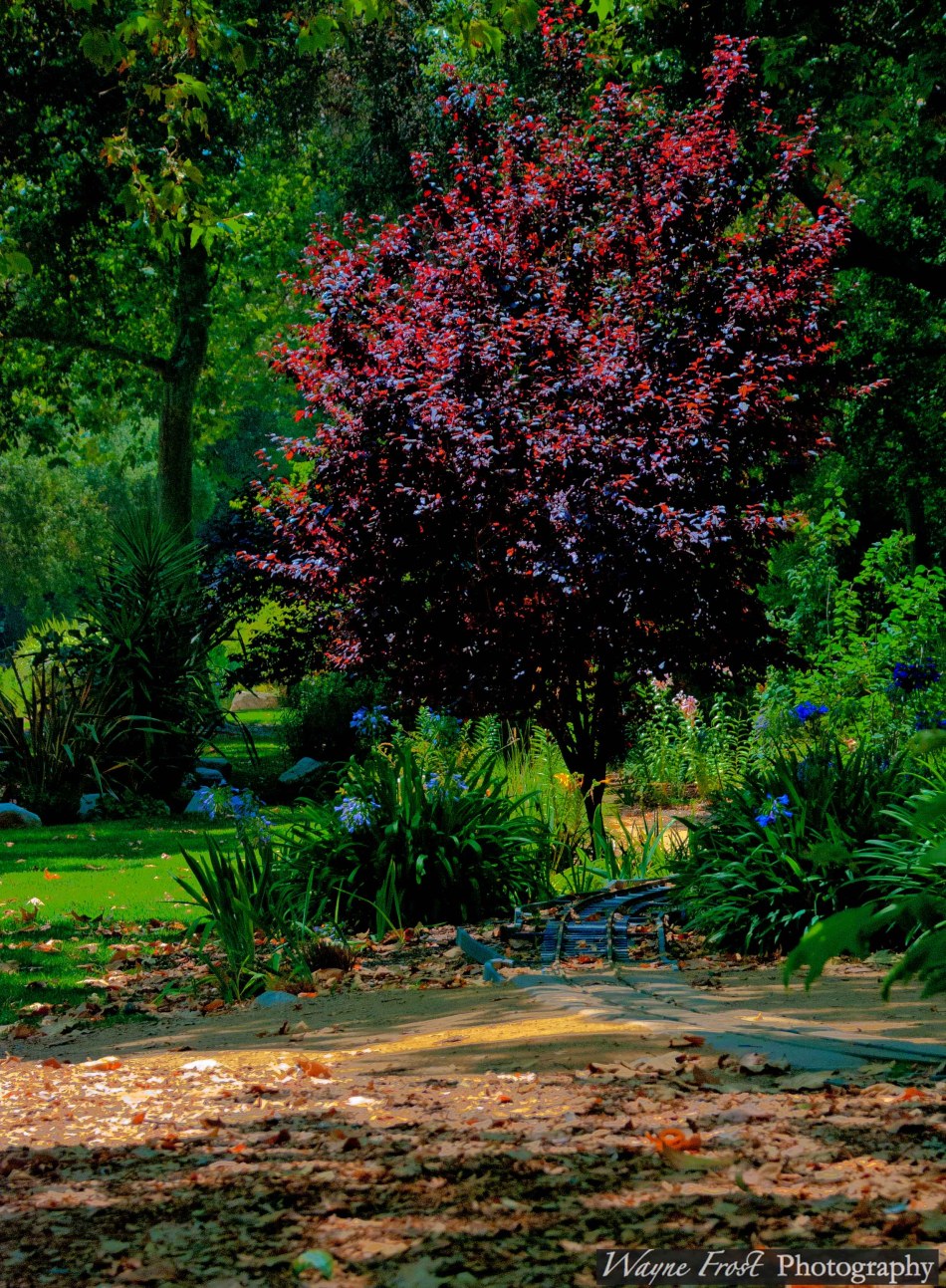 I captured this image last August when we visited Descanso Gardens in La Cañada, California.  I was experimenting with enhancing single exposure raw files with quasi-HDR processing.  The original exposure and its variations just did not convey the image we saw in the  flesh that day, so I had never bothered to consider this a “keeper”.  That was before I discovered the world of HDR photography.  Today I re-processed the image (which was originally converted to DNG in PS Elements) using Lightroom with the Photomatix plug-in and chose a heavy tone compressor pre-set, did a bit of a crop and some sharpening, and now I have an image that meets my standards as a “keeper”.

The Path To Higher Learning

This was the view looking west from Marston Quadrangle towards the Carnegie Building and Pearsons Hall at Pomona College, Claremont, California yesterday morning.  Pomona College was founded in 1887 as the first of the seven institutions that became the Claremont University Consortium.  Most of the combined campuses share approximately one square mile of contiguous space in the heart of Claremont California in a green shaded enclave developed from the arid and boulder strewn scrubland that was a part of the San Gabriel Mountains floodplain.  With an endowment calculated at $1.299  Billion in 2006, one can be fairly certain that this green oasis will continue to be maintained at a high level, well in to the future.

I captured this image and a few others between 11:00 and 11:45 yesterday morning as part of my HDR learning experience.  I would have liked to have been able to capture more than the three automatic brackets delivered by the camera, but that would be very difficult under present circumstances.  I restrained myself from over processing during tone mapping, but Judy thinks I went too far with this image.  I did push things, but I wanted to bring out a lot of detail and emphasis with the foliage.  Some of the intricacies of Lightroom have been confounding me, so a lot of time is spent on trial and error and reviewing tutorials.

We have just begun exploring the image capture opportunities in Claremont, and will be returning in the future.