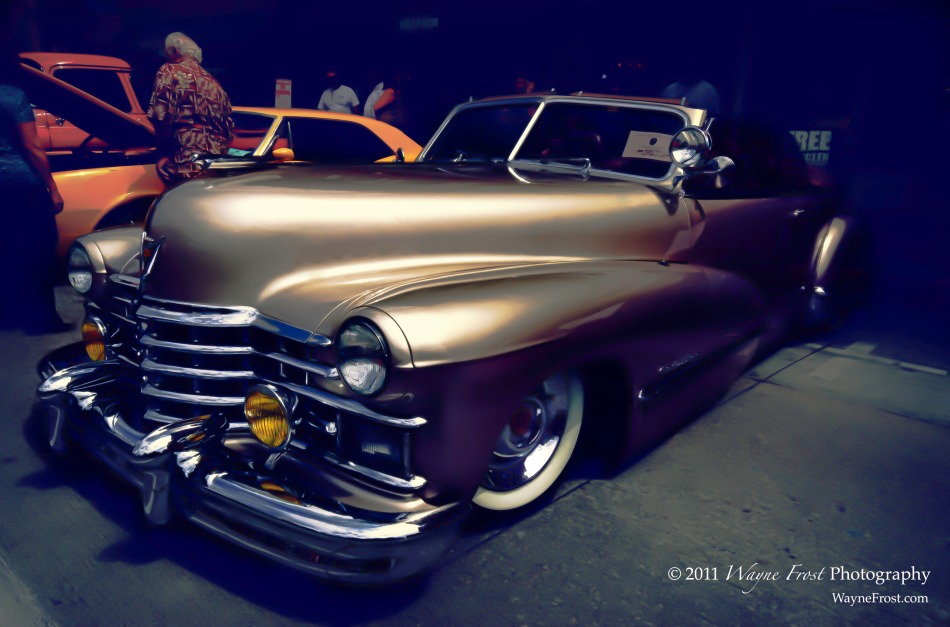 A week after the Vette Set show we paid a visit to the Pasadena Police Department’s annual classic car show.  The PD shut down Colorado  Boulevard (where the Rose Parade is held every New Year) in front of the Paseo Pasadena shopping center.  This caddy was my favorite of all the rides on exhibit that day.  A very low to the ground, super sexy convertible coupe, I gave the scene a dark romantic look, and emphasized the symbolic front end to underscore my impression of this being a sleek bling machine that will guarantee it’s owner a score.

In addition to aircraft in varying states of repair, the Planes of Fame museum collection at the Chino Airport, Chino, California includes various mechanized vehicles of the ground hugging kind. Walter The Warthog appears to be an M3 /M5 (Stuart) Light Tank, on his starboard side is a verified M4 (Sherman) Tank that is still fully functional.  The M3 was manufactured in the United States and used two Cadillac radial motors, it’s main gun was a 37mm cannon and it also had five Browning .30-06 machine guns.  The Stuart tank was first used by the British in World War II and they nicknamed it “Stuart” after the U.S. Confederate General J.E.B. Stewart.  The M3 was the first tank used by United States forces in World War II in tank to tank warfare.  22,743 of these tanks were produced by the United States.

A medium tank, the M4 (Sherman), so nicknamed by the British after Union General William Tecumseh Sherman, was the primary tank deployed by the United States during World War II, and was also distributed by the United States to its allies, the British and Russians.  The M4 was equipped with a 75mm cannon as its main gun and the tank crew was able to fire this gun with reasonable accuracy while the tank was moving.  58,000 of these tanks were ultimately deployed.