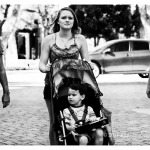 This toddler has nothing to worry about, he can just sit back and enjoy the ride and take in the sights.  He has the MGS (Maternal Guardian Squad) protecting his back and flanks.  No rational person will ever try to get between a mother and her child, and this mother is unambiguously demonstrating this precept with her gaze.  It is a reality of life though, that once they reach puberty, there becomes less and less that a mother or father can do to protect their child from the risks in life, the best that can be hoped for is that beginning early in their child’s lives, parents can encourage critical thinking and a foundation of adequate moral and ethical values.

Each In Their Own World

At the same time that Judy and I were taking a break from a photo walk in Riverside, California I captured a series of images of this trio also taking a break in the shade.  The father had been trying to interact with his son, which I had captured in earlier frames, but the son seemed to have a very short attention span, and in this image the father has finally given up his efforts to engage his son, it would seem in frustration.  (Which is only my interpretation, yours may differ.)