This is another angle on “Mitch The Witch II” that was featured in an earlier post.  As described in the earlier post, “Mitch The Witch II” has had a colorful history and is still flying out of the Palm Springs Air Museum.  I’ve started playing with the HDR Pro filter in Photoshop CS6 and used it on this image, I am liking the results I am getting with this, but I have also recently upgraded to HDR Efex Pro 2 and am liking those results also. 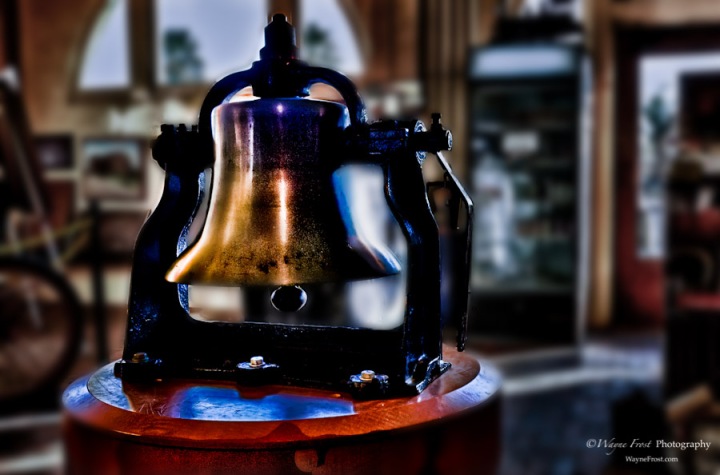 Among the artifacts on display at the San Bernardino Railroad & History Museum is this old locomotive bell.  A nice jog of the memory of times past actually lived (by some of us) or as reproduced on the motion picture or television screen.  I can hear that distinct sound of a locomotive bell  pealing as it is rocked back and forth on its cradle in my mind. 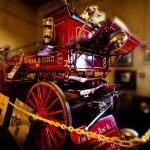 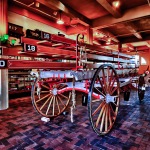 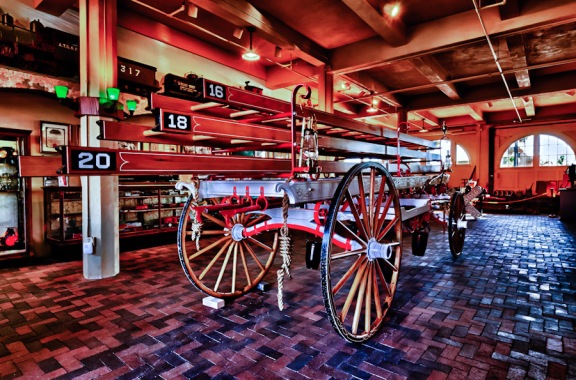 One of the artifacts on display at the San Bernardino Railroad & History Museum, San Bernardino, California is this hook and ladder “truck” that dates back to the 1900’s.  If you look closely you can see the hook protruding from the red ring hanger that is attached to the rear of the truck chasis.

The Los Angeles County Fire Museum also displays an early hook and ladder and had this to say about it on their web site:

It carried ground ladders and a roof ladder. A roof ladder is a ladder that has hooks that are spring loaded on the tip of the ladder that could turn perpendicular to the ladder so that the ladder could lay flat on the peak of the roof. The hooks would grab the ridge and hold the ladder in place so that the firefighters could work off the ladders. This is particularly helpful when there is a steep pitched roof. Especially when it is wet, it can be very hard for a firefighter to keep his footing. So, the roof ladder is used to provide better footing and safety.

It also carried axes and picks, and also the famed “hook”, giving it the name “Hook and Ladder”. The hook was used to pull down damaged buildings or chimneys to stop the spread of fire by creating a fire break. Sometimes, in early chimneys, the fire would get going in them and they could not put it out. So, they would just pull the chimneys down with the hook. The hook and a chain and a rope, and they used a long stick to get the hook up to the height to whatever they needed to grab, whatever piece of the building they needed to grab onto. They would use the chain and the rope hooked to the building, and a bunch of men would grab that to pull the wall down, or pull the chimney down.

Please click on either image to view in full resolution.

Monument To A Bygone Era

The first Santa Fe depot in San Bernardino was a wood structure, built in 1886.  A fire leveled the depot on the night of November 1, 1916.  The depot was rebuilt of wood and masonry in the Mission Revival style and opened on July 15, 1918.  The heyday of the depot was from the 1920’s to the 1950’s; a Santa Fe timetable published in June of 1938 listed 13 eastbound and 13 westbound passenger trains departing from the terminal every day.  In 1972 Santa Fe’s passenger service was turned over to Amtrak, and in 1992 the Santa Fe Railroad moved almost their entire freight operations to Barstow, California and Topeka, Kansas.

In 1992 the San Bernardino Association of Governments acquired title to the depot and began a restoration.  That same year Metrolink commuter rail operations began arriving and departing from the tracks adjacent to the depot.  Today Metrolink continues to operate at the depot and one Amtrak train departs eastbound and one Amtrak train departs westbound per day, this is the Southwest Chief that operates between Chicago and Los Angeles.

The San Bernardino Railroad & History Museum occupies most of the center section in the image above on the first floor.  There is no rolling stock in the museum’s collection except for some small maintenance apparatus, but there are quite a few railroad artifacts on display, and some early fire apparatus.