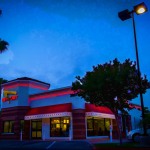 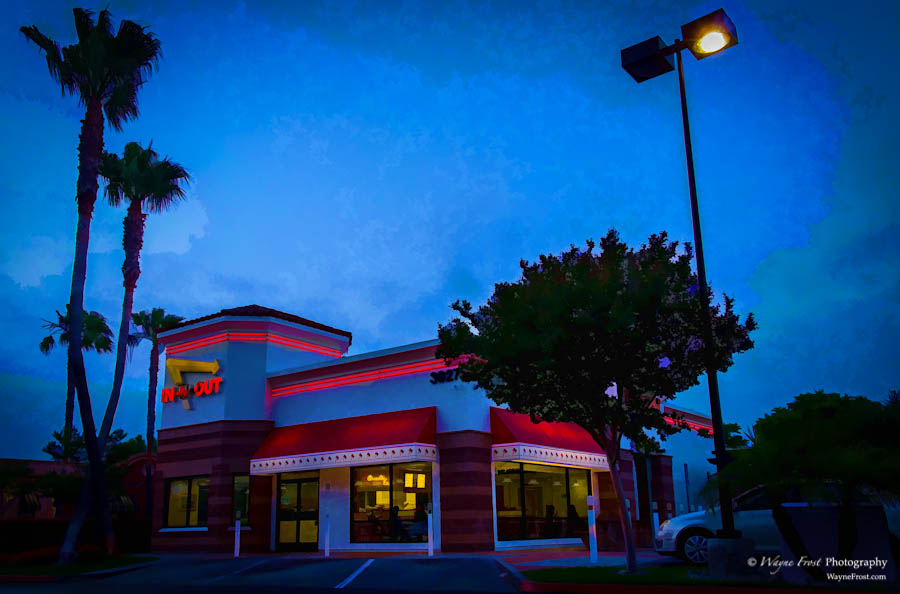 In-N-Out, which is a small chain with its origins in Southern California and has near cult status when it comes to fast food burgers.  People either seem to love them or hate them.  They produce a a very distinctive fast food burger that comes off of a flat top (griddle), instead of the usual shredded lettuce and chopped onions the burgers are garnished with fresh whole lettuce leaves, fresh sliced tomato and a fresh sliced disc of onion.   They should not be  compared to char-broiled (grilled) burgers, totally different animal.  I like their Double-Double, double meat and double American cheese; while I take mine with usual onion, tomato and lettuce, I have them hold the “spread” and hold the cheese, to lower the fat, and add mustard and ketchup.  Now that is a very satisfying burger when you have a hankering for that genre of burger.

Temple of the Underclothes Sect

There it looms, radiating mystical colors in the dark night, the temple of the underclothes sect.  Legend has it that when the moon is overhead, scantily clad maidens with wings of angeles will appear on the second level of the temple, beckoning men with fat wallets and wakened libidos and matrons with aspirations of pulchritudinous physiques and unfulfilled dreams of romance in to the inner chamber of the temple.  Once inside, and under the spell of the priestess of the temple, the men and women will make offerings of their treasures and be rewarded with the sacred garments.  The men and women will leave the temple with their sacred garments and dreams of rapturous moments to come, but no certainty of fulfillment.  And the angels  will deliver the collected treasure to the coffers of the deities in the great temple known as New York Stock Exchange, and then return to the Third World where they will trade acorns for more sacred garments before the next new moon.

The light might bring brightness and a sense of warmth to an alley on the back side of a block of buildings, but the light only radiates so far, and as you walk beyond the light, your eyes do not adapt immediately, and you enter the surrounding shadows with an enhanced sense of foreboding, not sure what demons lurk in the darkness beyond, and then you begin to approach the next pool of light. 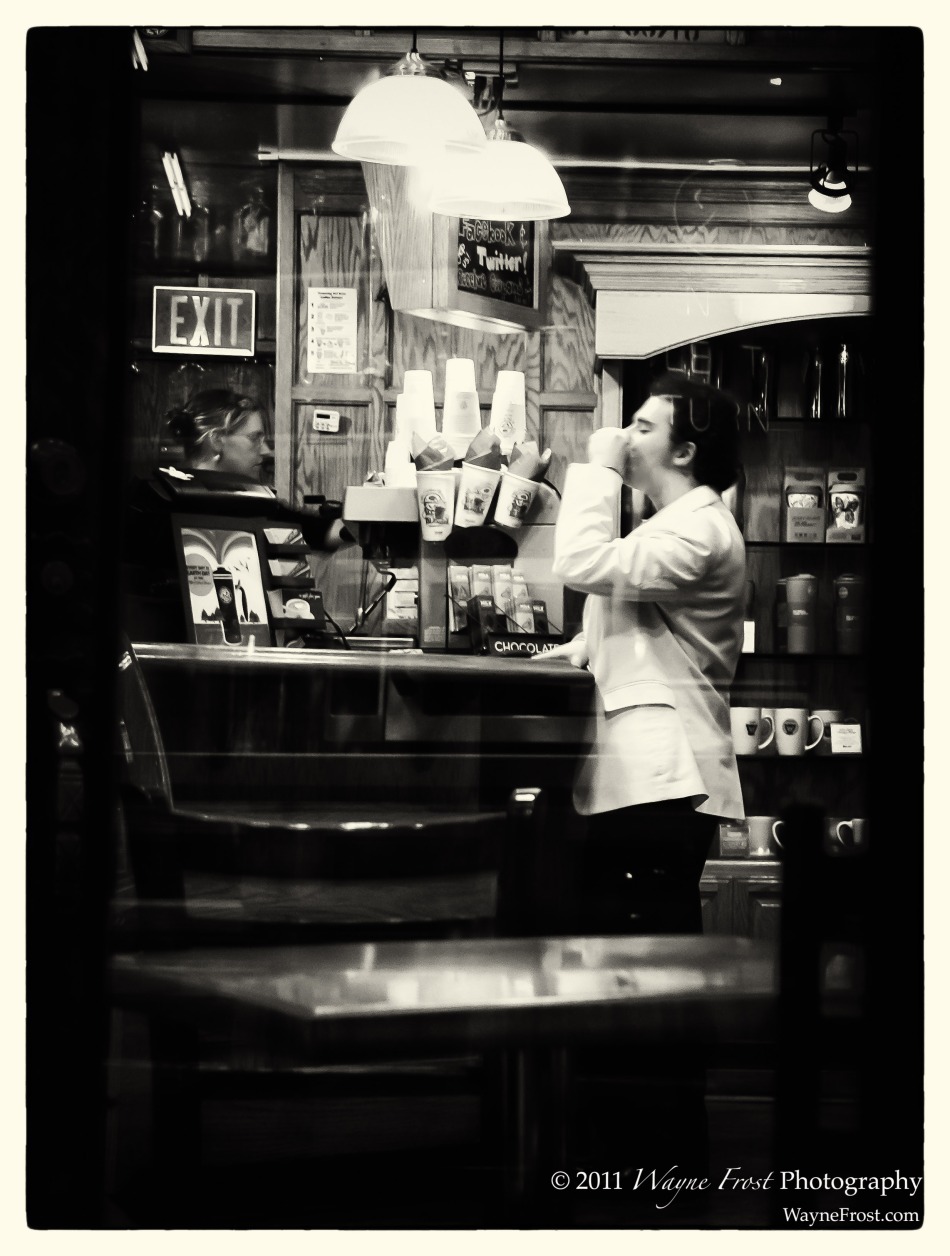 The last customer of the evening at closing time at the Coffee Bean & Tea Leaf, Old Town, Pasadena, California.  I debated with myself about whether I would publish this or not.  This final image is about a 20% slice of a full DX frame from the camera, that I should have cropped in camera by using a longer focal length (and with the camera in a vertical orientation), so the detail quality of this rendering would have been up to my standards.  I liked the possible stories that this image conjures up so much that I decided to share it.  Next time I will be more deliberate, and think my shot through, before just clicking the shutter in reaction to the moment.

The shot was through a window and there is some reflection from some exterior lights that interferes with the image.  I did alter the tones in the man’s face because it was distorted by the reflected light (possibly some neon tubing across the street) but left a remnant of the neon tube in his hair (I did not want to manipulate this street life image more than necessary).  You can also discern some banding of the image from the reflected light. I have been thinking about distractive light reflections a lot recently while capturing more shop window images and I have come to the conclusion that while my primary interet is what is behind a shop window, that in real life as you look through a window unwanted reflections are usually present to one degree or another, so if I can’t cleanly eliminate them, I might as well accept them as part of the reality of the scene as we live it. 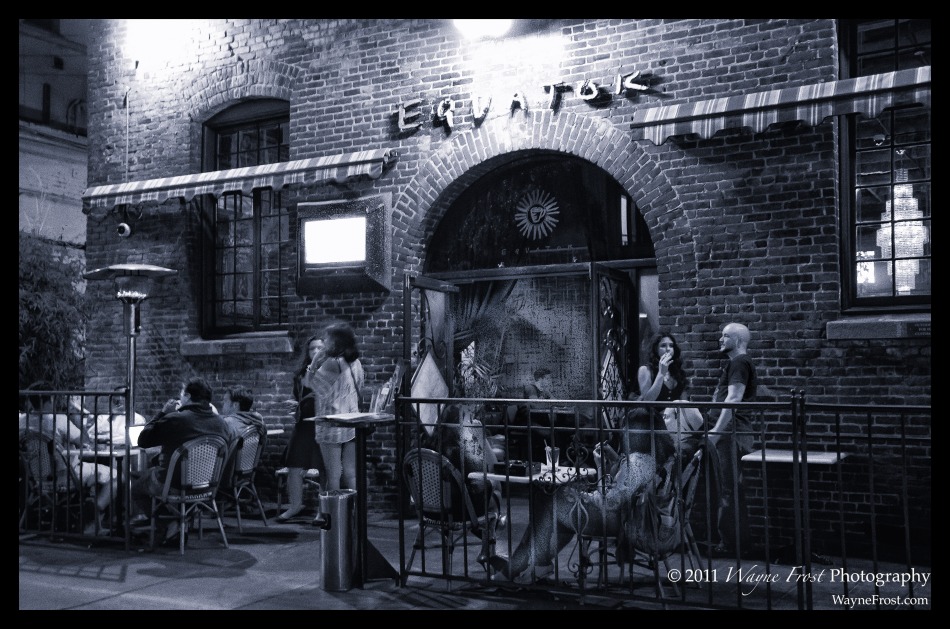 This is the window at the rear of the Place Vendome shop on the alley way between Miller’s Alley and Smith Alley in Old Town, Pasadena, California.  Just a straight forward image, no application of post processing filters, just minimal exposure and contrast adjustments. 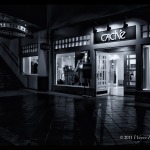 Continuing the visit to Paseo Pasadena in Pasadena, California here are two interpretations of the image I captured of the Cache shop:

I was trying to give some mystery and intrigue to the stairway and kept it dark during post processing.  For some reason my mind imagined pirates coming down the stairway looking for the cache of treasure.

In this version I experimented with the fog effect available as one of the Nik Color Efex Pro filters, imagining Cache as a warm, inviting grog shop on the end of a foggy pier.

I would really like to know which image resonates more with you, so please leave a comment indicating your preference.

Out In The Cold

The weather in Southern California has been unusually cool recently and when we came upon Starbucks last Saturday evening every available seat inside was taken up with bodies staying nice and toasty.  The temperature  outside was probably in the low forties or high thirties when this image was captured, making the very hot, large non-fat mocha latte that Judy brought out to me that much better.

The exposures were 1/20, 1/6 and .7 second, using the monopod.  A couple of hot spots were dodged, and one area was cooled down using Control Points in HDR Efex Pro and Nik Sharpener Pro 3 was used for final sharpening.