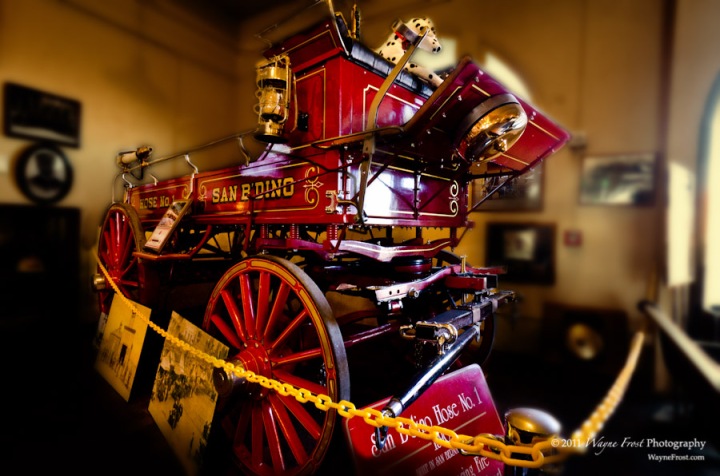 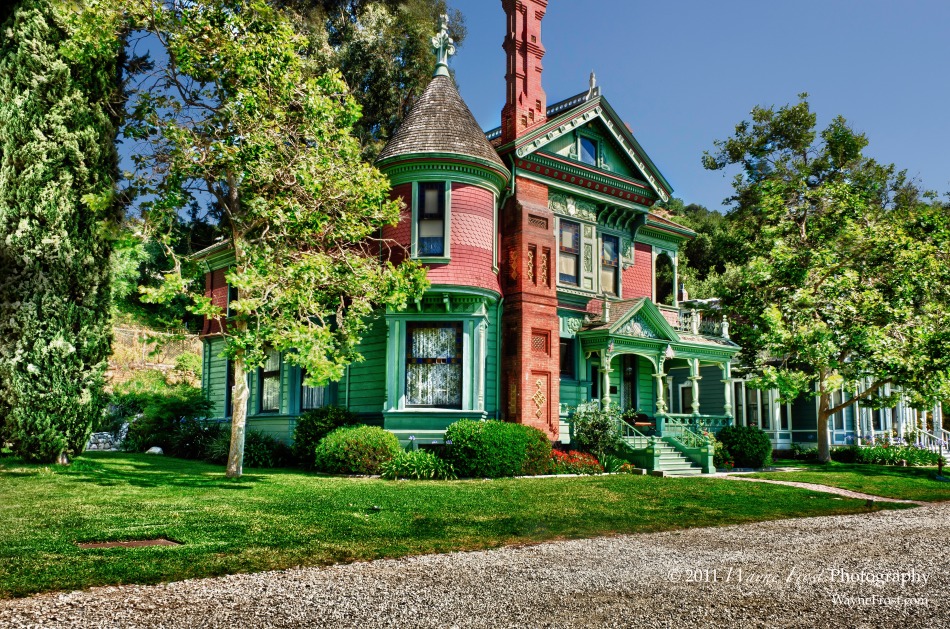 Prior to capturing the image of the “Heritage Boxcar” that I posted this past Monday, I captured a few sets of brackets of the Hale House at Heritage Square, Los Angeles.  The Hale House was constructed in 1887 in the Queen Anne and Eastlake styles by George W. Morgan who was a land speculator and real estate developer.  The house was moved from its original location to a second location and changed hands a number of times before being purchased by James Gl Hale.  Hale lived in the house a few years until he separated from his wife Bessie.  After the separation Bessie Hale retained title to the house and lived in it until her death in a rest home in 1967, and ran the house as a boarding home for much of that time.  The house was donated to the Cultural Heritage Foundation by Bessie Hale’s heir in 1970 and it was moved to its current location.

I have to say I am fairly proud of this image, I think it demonstrates that I have made some more progress practicing my HDR techniques.  I started by mounting the Nikon D7000 on a tripod with the 18-135mm lens and with my Promote Control interfaced to the camera.  I had Judy hold up a gray card in front of the house for one shot.   I fired off a few sets of seven brackets (-3 EV to +3 EV) with slightly varying perspectives on the house and converted the camera raw files to DNG in Lightroom.  Initially in the Lightroom Develop module I used the automatic color correction tool to key on the gray card and set the proper color setting on all the files, and I also used the automatic lens correction tool to correct any distortion.  I exported the selected seven brackets to Nik’s HDR Efex Pro and applied one of the Realistic pre-sets which I then tweaked, then  I converted to TIFF and sent the image file back to Lightroom.  I then opened the HDR TIFF file and the middle bracket (-0-) DNG file in Photoshop.  I then used layer masking to overlay the top of the chimney and the sky from the middle bracket to correct the top of the chimney which was blown out in the HDR and to replace a halo-ed sky with a clean sky.  I also used content aware fill in Photoshop to remove a water faucet, garden hose, and some scattered cinder blocks from the lawn in front of the house.  Back in Lightroom I made a slight crop to remove some of the gravel foreground, sharpened and applied minimal noise filtering.

A little change up this week from street life to a emphasis on color.   This tree stands on Wheeler Avenue in La Verne, California, backed up by the San Gabriel Mountains. The image was captured in the late afternoon at 5:46 P.M. on May 21.  I really like how the sun plays on the mountains during this time of day, the mountains are oriented on an east-west axis, and when the sun is getting low the light really delineates the contours of the south facing slopes. This always fascinates me as we parallel the face of the mountains when we drive along I-210 during this time of day.

After conversion from NEF to DNG in Lightroom, I tone mapped in Nik’s HDR Effects Pro working off of a preset furnished by Jason P. O’Dell, selectively dodging in, upping the contrast and structure in various areas of the tree using control points, slightly darkening the foliage to the left and right of the tree; using Nik Color Efex Pro, applied the Kodak Ultra Color 400UC  film effect.  In Photoshop I removed a distracting palm tree, light standard and electrical utility box that stood adjacent to the tree and attempted to mitigate the slight halo-ing effect by color masking in layers, but to no avail.  Back in Lightroom I sharpened and did a little noise reduction, and exported the TIFF file that was created by HDR Efex Pro to a JPG file.

Tree Dormant In Winter; An Exercise In Black & While

The tree with its branches bare of leaves during its season of dormancy presides over Waring Park in Piru, California, hard by the usually dry Santa Clara River bed.  I am surmising that the dark clumps of vegetation among the branches are nests for some of the local critters, but we did not see any while on the scene.  Whether avians or small mammals or marsupials, the creatures that made their homes up in the branches did so to stay safe from predators who might be roaming the neighborhood.

We were in the area to photograph an old railroad trestle, and I did capture those brackets before I set my sights on this tree.  I actually think the tree was the better overall image.  After the initial HDR processing and merging of the brackets with Nik HDR Efex Pro I processed the final image with Nik Silver Efex Pro, and did a little dodging with the adjustment brush in Lightroom.  I have pre-ordered a copy of Silver Efex Pro 2 and am waiting to get my hands on that, which appears to be even more robust than Silver Exfex Pro 1. 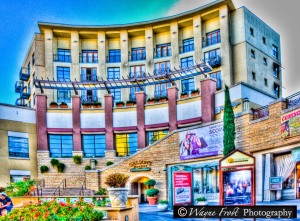 You should never hesitate to return to an old image and re-work it.  This image was originally created in September of last year when I was first experimenting with HDR techniques.   Looking back at the original rendition of the image I can say in all honesty, it was fairly crude and cartoonish as you can see in this thumbnail.  I did not hesitate to post the image back then because I consider this blog a manifestation of my growth and development as a photographer, and was just excited to share my journey of discovery of HDR technique.  So it is with some pride and a sense of redemption that I am posting the revised image today.  Isn’t this what life is all about, living and learning, every day.

As far as what I did when I reprocessed the image:

I had a blast re-creating this. 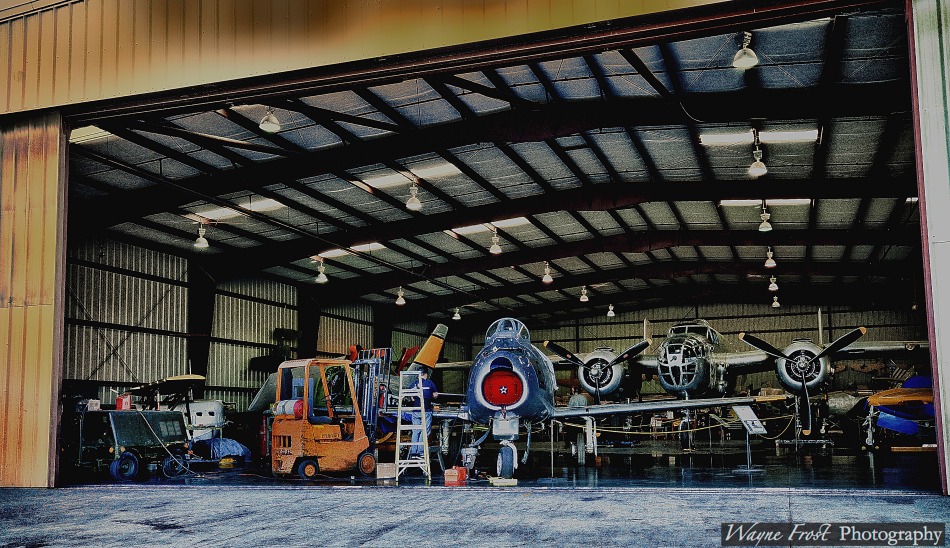 This is the Friedkin restoration hanger at the Planes of Fame air museum, Chino Airport, Chino, California.  In the foreground a Canadair F-86-E fighter is  being restored, the aircraft behind it seems to be a North American B-25 undergoing restoration.  Canadair was the Canadian licensee for the manufacture of the F-86, which was originally developed by North American Aviation.  As with many of the other aircraft exhibited at the Planes of Fame, the F-86 is being restored to total airworthiness and will be part of the flying collection in the future.

There was quite a difference in contrast between the dark interior of the hanger and its outside walls which I ended up burning in using control points in Nik HDR Efex Pro.

In addition to aircraft in varying states of repair, the Planes of Fame museum collection at the Chino Airport, Chino, California includes various mechanized vehicles of the ground hugging kind. Walter The Warthog appears to be an M3 /M5 (Stuart) Light Tank, on his starboard side is a verified M4 (Sherman) Tank that is still fully functional.  The M3 was manufactured in the United States and used two Cadillac radial motors, it’s main gun was a 37mm cannon and it also had five Browning .30-06 machine guns.  The Stuart tank was first used by the British in World War II and they nicknamed it “Stuart” after the U.S. Confederate General J.E.B. Stewart.  The M3 was the first tank used by United States forces in World War II in tank to tank warfare.  22,743 of these tanks were produced by the United States.

A medium tank, the M4 (Sherman), so nicknamed by the British after Union General William Tecumseh Sherman, was the primary tank deployed by the United States during World War II, and was also distributed by the United States to its allies, the British and Russians.  The M4 was equipped with a 75mm cannon as its main gun and the tank crew was able to fire this gun with reasonable accuracy while the tank was moving.  58,000 of these tanks were ultimately deployed.