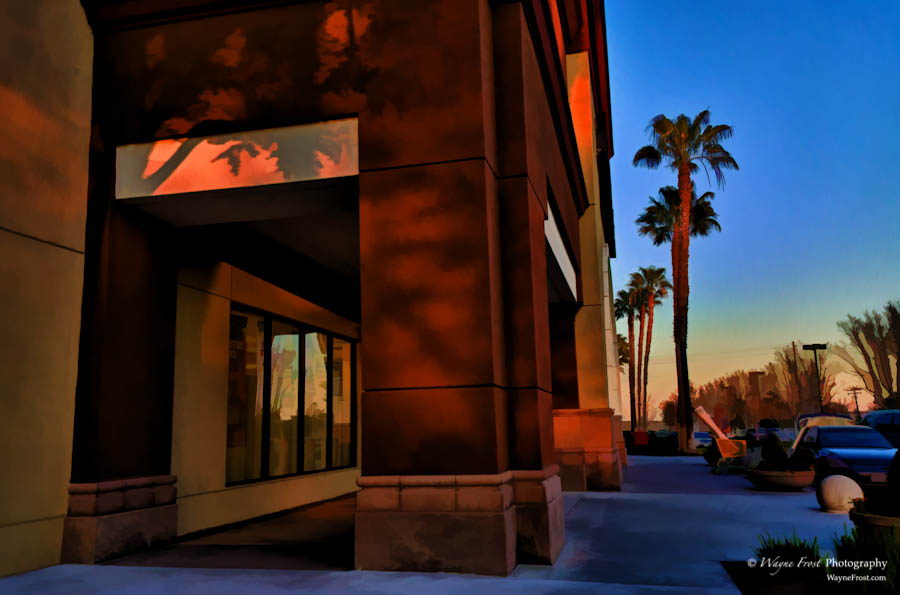 A big box store at the Chino Spectrum & Marketplace in Chino, California.  I like the vertical lines and the warm color tones that play against the cool evening sky. 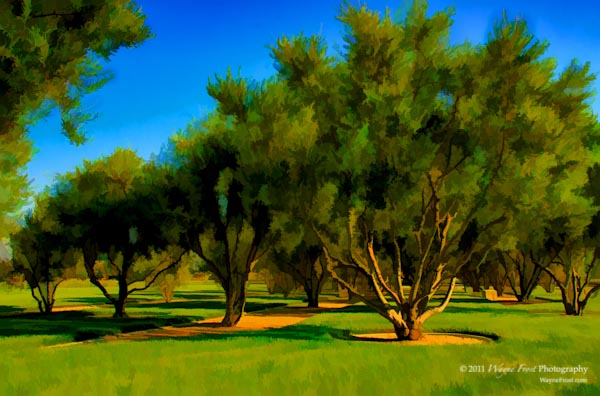 Exploring more painterly effects this week I began with this tree that is living at the intersection of Main Street and Mission Inn Avenue in Riverside, California.  The image is a combination of three exposures initially processed in Lightroom and then merged and tone mapped with Nik Software HDR Efex Pro.  Then working with Photoshop the Alien Skin Snap Art filter was applied and slightly tweaked. 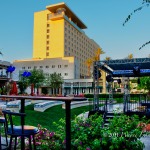 The Rock Yard is an outdoor performance area at the Fantasy Springs Casino & Resort in the low desert at Indio, California.  The resort’s pool is behind the line of palm trees in the background, and the pool deck gets very crowded during the day.  This adjacent area is a comprised of architectural elements, landscaping and a mix of comfortable chairs and lounges generously scattered throughout,  it is never crowded during the day and is a very calming and inviting place to relax in the early morning or late afternoon.  On weekend evenings live bands perform on the Rock Yard stage and guests can sit  on the benches on the lawn, at the cocktail “rails” and at tables on patios or an overhead deck adjacent to three restaurants and enjoy the music.

This HDR image was captured at 6:30 P.M. in late May as the sun was on its way past the western horizon.  The building tower and the palm trees in the background were the only elements that were in direct sunlight, everything else in the image was in open shade.  The yellow-ish color cast to the part of the building that is in direct sunlight and the color cast on the palm trees in the background are a result of color temperature of setting sun light.  I am not happy with the halo-ing in the sky and tried every trick I knew in an attempt to mitigate it in post processing, but was not successful.  I think that if I had captured more than three brackets I might have had at least one or two brackets with an even toned sky, but I was shooting hand-held, and three brackets in camera (without tripod and without my Promote Control) is all I could get.

Something else I am noticing as I post this in the WordPress hosted blog is that the color and brightness seems to be off when I preview this blog post, it does not match what I am seeing when I display the image on my laptop from within Lightroom from the DNG file or when I display a JPG of the image from my laptop’s desktop.  After I post this in the blog I will put it up on G+ and see how it looks there.

Update: I have the image up on G+ and the color and brightness are still off.  I am thinking it is an issue of the default color setting I use with Lightroom which is ProPhotoSRGB which is unsupportable on the Internet.  I made a decision to use ProPhoto because I always wanted the greatest color range available to my images when they are printed, but have never before today noticed a significant difference between rendering images directly from a file on my laptop or rendering images brought back to the laptop from the Internet.   This has me concerned because all the images in my sales gallery are ProPhotoSRGB JPG files to ensure the best color image when prints are ordered, what would a buyer’s reaction be if he ordered a print and when he received it compared it to the image he saw on the Internet and realizes the images are different?

Update #2: The image is now uploaded to my sales gallery which is hosted by SmugMug and I was pleased to see that it is reproduced there exactly as I see it when I am looking at it directly on my laptop.  This leads me to believe that both WordPress and G+ might be altering the color and brightness of my images when they display them, this is quite distressing.

Update #3: I have taken James Brandon’s advice in his comment and re-worked the image in Photoshop, but not by just masking in the most even of the 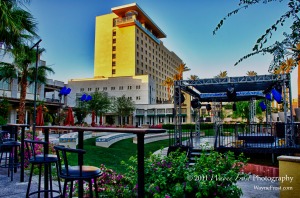 original frames, but also increasing the blue channel saturation of that frame.  A final vibrance and brightness adjustment to the blended image in Lightroom and I have a more acceptable final image.  The new final image is above, and the original image is off to the right.

It also appears that WordPress is handling my image the way I intended, and that may be because I specifically saved the file in sRGB format.  I have since changed my Lightroom default to sRGB. 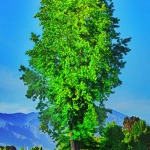 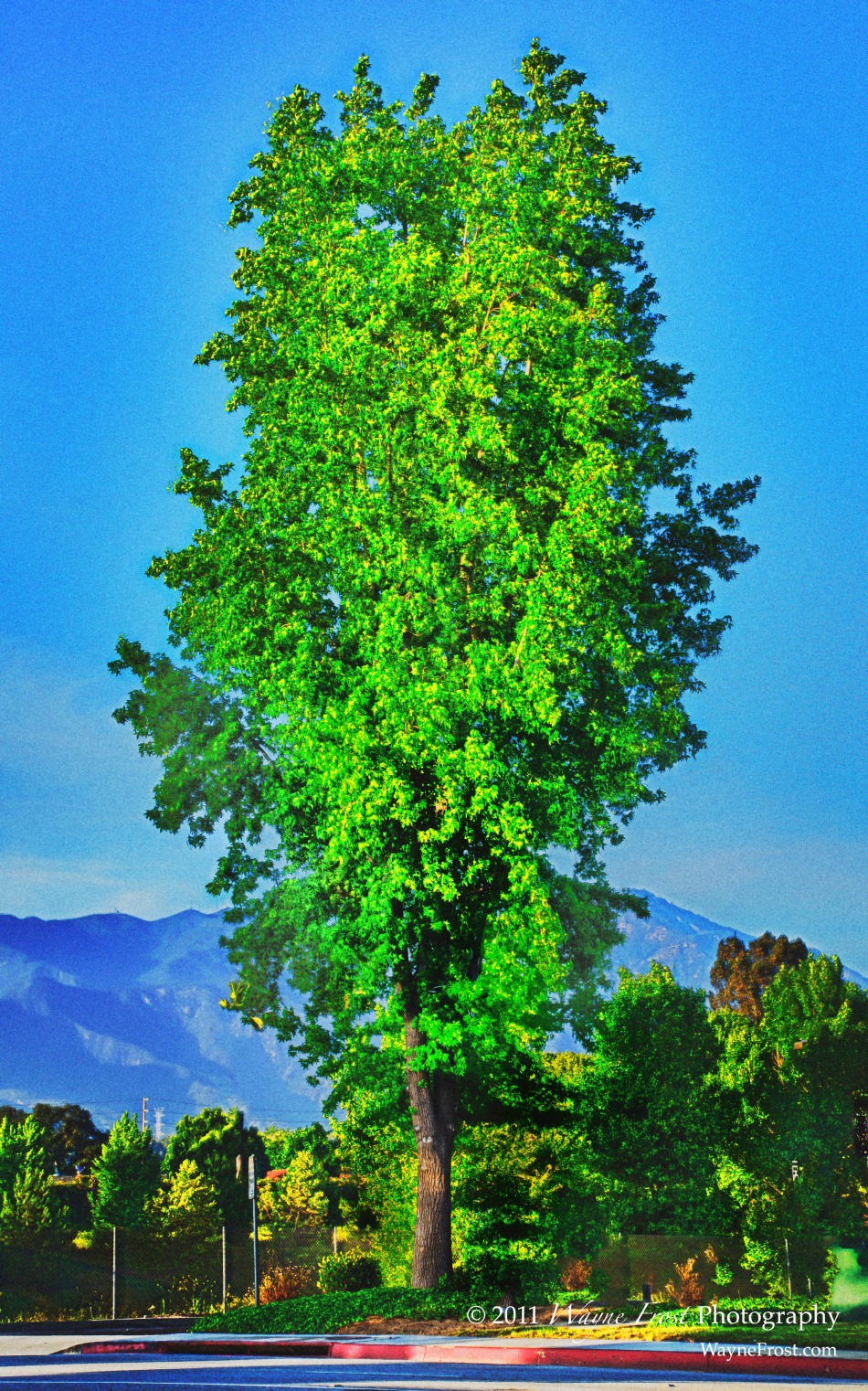 A little change up this week from street life to a emphasis on color.   This tree stands on Wheeler Avenue in La Verne, California, backed up by the San Gabriel Mountains. The image was captured in the late afternoon at 5:46 P.M. on May 21.  I really like how the sun plays on the mountains during this time of day, the mountains are oriented on an east-west axis, and when the sun is getting low the light really delineates the contours of the south facing slopes. This always fascinates me as we parallel the face of the mountains when we drive along I-210 during this time of day.

After conversion from NEF to DNG in Lightroom, I tone mapped in Nik’s HDR Effects Pro working off of a preset furnished by Jason P. O’Dell, selectively dodging in, upping the contrast and structure in various areas of the tree using control points, slightly darkening the foliage to the left and right of the tree; using Nik Color Efex Pro, applied the Kodak Ultra Color 400UC  film effect.  In Photoshop I removed a distracting palm tree, light standard and electrical utility box that stood adjacent to the tree and attempted to mitigate the slight halo-ing effect by color masking in layers, but to no avail.  Back in Lightroom I sharpened and did a little noise reduction, and exported the TIFF file that was created by HDR Efex Pro to a JPG file. 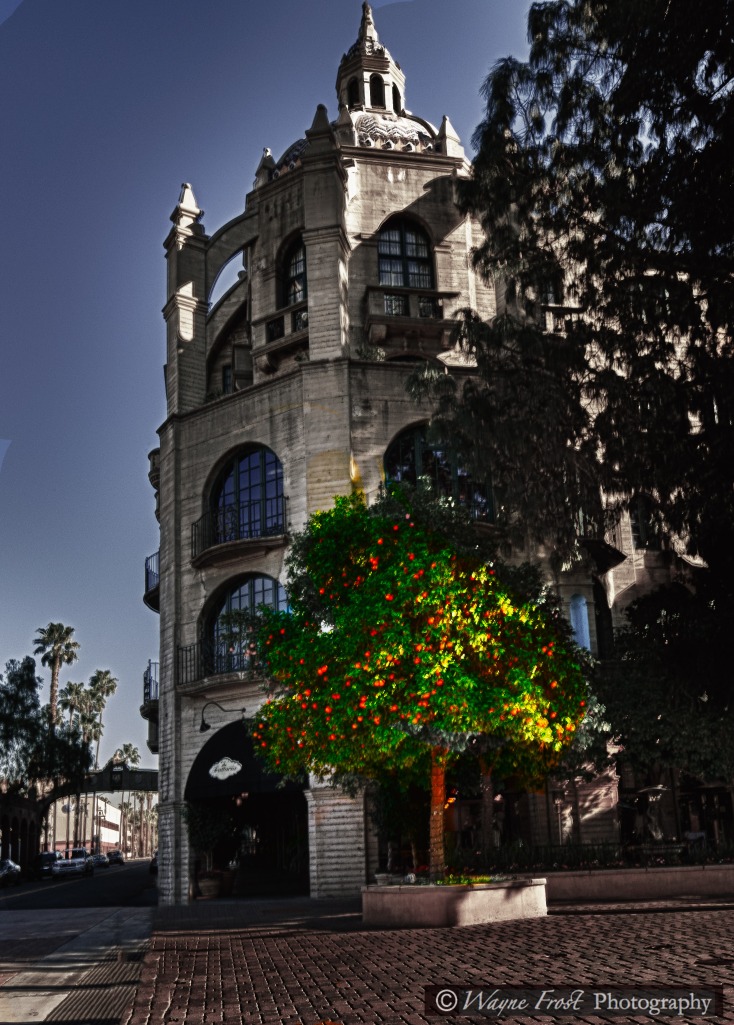 Sharing the corner of Sixth and Main (foreground) Streets in Riverside, California are two icons of Riverside history, the Mission Inn and a navel orange tree with a bountiful crop of fruit.  The Mission Inn’s origin was an adobe boarding house built by Christopher Columbus Miller in 1876, in 1903 his son, Frank Miller took control of the property and began a decades long building spree that eventually eliminated the original structure and replaced it, piece-meal with a

much more ambitious structure that is commonly known as the largest Mission Revival Style building in the United States.

The orange tree is very significant to Riverside residents as the national commercial production and marketing of the navel orange began with the first two trees trees planted by Eliza Tibbets (from specimens collected in Brazil by the U.S. Department of Agriculture) in 1873.  In the early 20th century Southern California became the center of the citrus fruit industry in the United States.

Using layers and masking in Photoshop I desaturated most of the image, and then brought out the color saturation in the tree.  I also removed some distracting elements. I am still having focus issues and am not satisfied with the sharpness of this image.

Author’s note: Can you find my cloning error in the original image rendition? 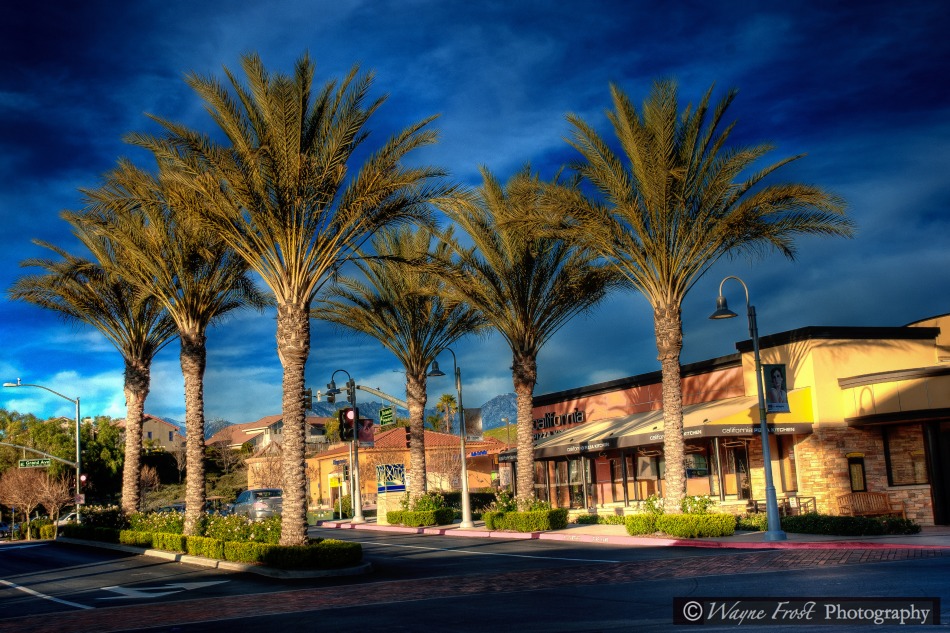 Palm trees are prevalent throughout Southern California.  This shot was made in Chino Hills, California.  I was attracted to the symmetry and grace of the palms when I captured this image, then brought emphasis to the sky and balanced the blue of the sky against the warm tones of the buildings using Color Efex Pro.

Tree Dormant In Winter; An Exercise In Black & While

The tree with its branches bare of leaves during its season of dormancy presides over Waring Park in Piru, California, hard by the usually dry Santa Clara River bed.  I am surmising that the dark clumps of vegetation among the branches are nests for some of the local critters, but we did not see any while on the scene.  Whether avians or small mammals or marsupials, the creatures that made their homes up in the branches did so to stay safe from predators who might be roaming the neighborhood.

We were in the area to photograph an old railroad trestle, and I did capture those brackets before I set my sights on this tree.  I actually think the tree was the better overall image.  After the initial HDR processing and merging of the brackets with Nik HDR Efex Pro I processed the final image with Nik Silver Efex Pro, and did a little dodging with the adjustment brush in Lightroom.  I have pre-ordered a copy of Silver Efex Pro 2 and am waiting to get my hands on that, which appears to be even more robust than Silver Exfex Pro 1.