On Myrtle Avenue in the pedestrian friendly Old Town, Monrovia, California.  There are quite a few restaurants and retauraunt/bars in this neighborhood.

Colorado Boulevard in Old Town, Pasadena, California during a late afternoon in January.  I really enjoy capturing images of the Pasadena urban scene, the variety of architecture and what I can produce using the lines, shapes and colors and textures that I find. 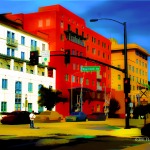 These buildings stand on the north side of Del Mar Boulevard between South Raymond Avenue in the foreground and South Arroyo Parkway in Pasadena, California.   Coming up Raymond from where we parked I was attracted by the bold colors of the buildings which reflect the re-urbanization of Pasadena, they were constructed after the beginning of the new millenium and are primarily housing units with maybe some business activity on portions of the first floors; there is an interurban rail line that passes through the red building in the center.  This block of buildings is situated on the southern edge of Old Town Pasadena, adjacent to many Pasadena historic structures.

I started with an HDR processed image, used Lightroom to flatten some of the detail, then went further with Topaz Simplify.  Then masked back in some of the detail at varying opacity; then hand painted in all of the white building in order to get the color  and texture where I wanted it.

This old boxcar is resting on the western edge of Heritage Square, hard by the Pasadena Freeway (the nation’s first freeway) in Los Angeles.  As an example of great minds thinking alike I captured this image at about the same time that Van Sutherland captured a similar image, two time zones away.  Van titled his image “Character” and you will find it on his blog Exile Imaging.  Van’s version is more realistic than my interpretation, my excuse is that he had a better weathered subject than I did, covered with some great peeling paint, so I had to rely more upon slight of hand to make my surfaces more interesting. 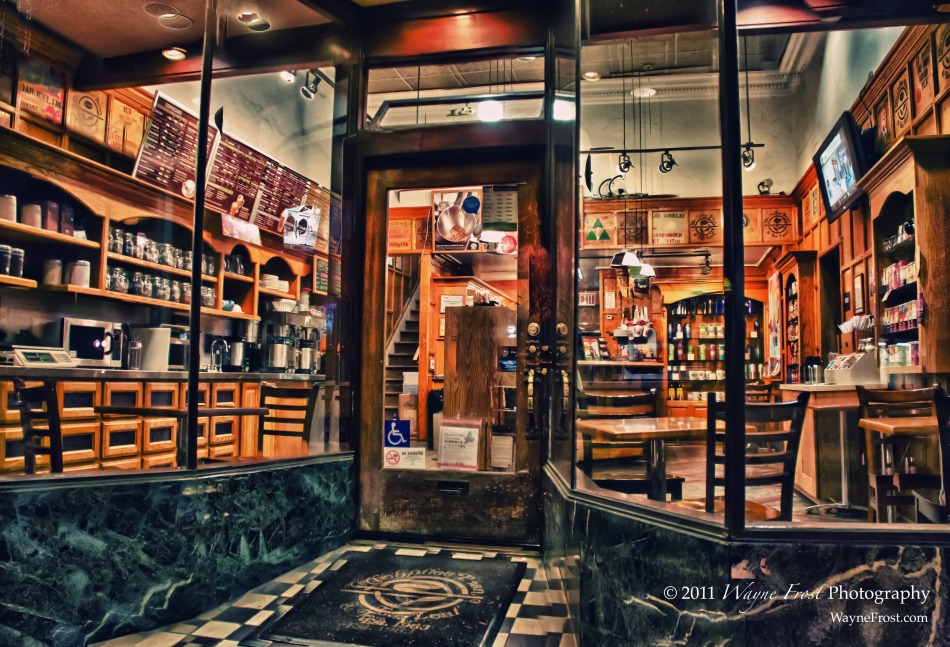 The Coffee Bean & Tea Leaf at the corner of Mercantile Place and Fair Oaks Avenue in Old Town, Pasadena, California is our bivouac for hot and cold coffee drinks when we are doing a photo walk in Old Town.  This shot was captured just after closing time on a recent weekday evening. 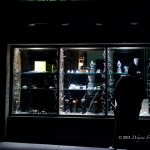 This is the window at the rear of the Place Vendome shop on the alley way between Miller’s Alley and Smith Alley in Old Town, Pasadena, California.  Just a straight forward image, no application of post processing filters, just minimal exposure and contrast adjustments.

This is Patterson Hardware on Central Avenue in Fillmore, California.  If you are a member of the digital generation you may not know what an independent hardware store looked like, back in the nineteenth and twentieth centuries.  No big box warehouse like emporium, no big national chain operation, no Home Depot and Lowe’s duopoly with a large corporate advertising budget.  Just a guy in a store front, with a sign on the front,  the time to devote to his customers, and a lifetime of tools, widgets, and sundry objects packed on the shelves and cataloged in his mind.

As I was capturing brackets out on the sidewalk, Judy was inside engaging in some commerce.  She had remembered that she needed some little odd ball doodad that has something to do with a lampshade and headed inside to see the man.  He fixed her right up.  Better than a possibly unsuccessful special trip to the big box store.

After HDR processing I used Nik Silver Efex Pro 2 to convert to black and white, and give the image a vintage look.